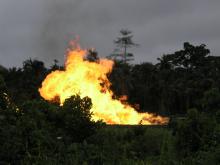 Gas flaring is the obnoxious practice of burning natural gas associated with crude oil extraction. To use the words of Joseph Croft of Stakeholder Democracy Network (SDN) in the excellent environmental documentary film No Where to Run, the gas flares are like giant cigarettes attached to communities. Some flares are located horizontally, at ground level, posing even greater dangers to the communities. There are several examples, including at Oben, Edo State and Kolo Creek in Bayelsa State.

Communities with gas flare stacks are sentenced to live with these furnaces and cannot avoid the heat, the noise, the poisons and the offensive vista. It is estimated that flared gas could potentially generate over 25,000 GWh of electricity which would meet a high proportion of Nigeria’s most ambitious power projections.

The Associated Gas Reinjection Act of 1979 outlawed gas flaring in Nigeria with effect from January 1984 and was aimed at compelling oil companies producing oil and gas in Nigeria to submit preliminary programs for gas re-injection as well as detailed plans for implementation. Oil companies can only flare, as an interim measure, if they have site-specific certificates permitting them to flare. Permitted or not, companies are required to pay fines for lighting those giant cigarettes in our communities. Unfortunately, routine gas flaring continues.

The penalty for gas flaring remains low and does not offer real incentives to defaulting oil companies to stop the practice. The current penalty for gas flaring in Nigeria was set by a Ministerial directive issued on 15 August 2011 at $3.50 per 1000 standard cubic feet. Attempts by the National Assembly, including through the moribund Petroleum Industry Bill (PIB), to raise the penalty to equal the commercial price of natural gas has not seen the light of day.

About $1.1bn gas flare penalties are reportedly not collected annually. This is more than the amount required to commence the full implementation of the UNEP report on the clean up of Ogoni environment. It simply goes up in smoke annually by way of uncollected fines from gas flaring. This sum could also assist in plugging the deficit in the 2016 National Budget if the reneged oil companies are compelled to pay up.

The Nigerian Gas Flare Tracker website informs that, according to a report issued in 2012 by the Petroleum Revenue Special Task Force, oil companies often do not pay the fines “and when they do are still paying the old penalty of N10 per 1000 standard cubic feet flared.”

The Task Force reported that the Department of Petroleum Resources, DPR, was “unable to independently track and measure gas volumes produced and flared. It depends largely on the information provided by the operators. There were no available records or information in respect of gas flare volumes for the years 2005 and 2011.” There are no readily available records for fines paid for gas flared in the period 2012-2015.

The loss of revenue to Nigeria from non-compliance to the 2011 penalty regime is enormous. According to the report of the task force, “Using the DPR gas flare information (irrespective of the inherent errors…) to compute the potential revenues for the relevant years at the rate of $3.50 per scf is $4.1billion versus the $177million computed by the DPR using the N10 per scf.”

The Nigerian Gas Flare Tracker hosted by the Federal Ministry of Environment is a tool that every Nigerian should look up to be informed about the atrocious gas flaring going on at about 220 locations across the Niger Delta. It is a great tool for public information. It is a tool that should spur policy makers into action to rescue our environment.