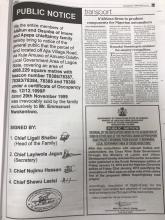 The forest comnunities and other threatened communities of Cross River State, Nigeria, have won a significant victory. The order of the Cross River State government revoking ownership of land extending to 10km on either side of the proposed 260 km Superhighway has just been reversed or “de-revoked” as the community people call it! Besides the threat that the alignment of the proposed highway poses to communities, protected and community forests, one very peculiar and alarming aspect of the project was the revocation of ownership of lands lying within 10 km on either side of the proposed superhighway. Many observers doubted the government’s claim that the 20km swath was needed as a development corridor or to protect the superhighway. The massive land grab was seen as an open move to harvest timber for export through the Deep-sea port appended to the superhighway. Such a destruction of the pristine forests would also mean a degradation of the rich biodiversity of the region.

The public notice assuring that communities would not be sent packing form their lands was issued by the State’s Commissioner for Lands and Urban Development, Dr. John Inyang, on behalf of the government. It states:

“After due consultation with relevant bodies and stakeholders, the Cross River State Government through the Ministry of Lands and Urban Development hereby reverses the earlier revocation order published in the Punch Newspaper edition of Friday, January 15, 2016 and the Nigerian Chronicle edition of Friday 22nd January, 2016 specifying the revocation of 10km span of either side of the centre line of the proposed 260km Superhighway road project.

“Accordingly, acquisition of right-of-way for the proposed road project and payment of compensation shall be limited to the 70m span of the road corridor.”

The revocation of the order brings some level of relieve to the embattled communities. Observers believe that the Environmental Impact Assessment (EIA) report prepared for the project is not site-specific as species not found in the area are mentioned in the document.

HOMEF welcomes this development, applauds the government for listening to the people, and urges the Cross River State government to go a step further by abandoning the Superhighway idea and rather investing in fixing, expanding and modernising the existing highway. Secondly, the government should urgently compensate individuals and communities whose farms, forests and properties have been destroyed on the basis of the now vacated order. The payment should be on the value of the physical and psychological damage suffered by the people and communities.