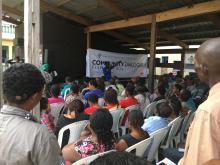 True change can come from below. Change can begin from below. True change must come from below. Just as it is the root system that makes a tree stand, so it is with changes that must last. We have ignored the roots of our problems long enough and today we are dissecting those roots so that we can clearly see where the proverbial rain began to beat us.

Along the 853km coastline of Nigeria are men and women floating in turbulent tides, seeking to draw out the swirling foods that are in turn seeking their own food.  There are epic struggles on and in our waters: our fishing brothers, sisters, mothers and fathers struggle to catch the aquatic beings. The aquatic beings struggle not just to escape the nets and hooks, but also to catch a breath as they are suffocated by myriad pollutants and poisons. These realities extend along the coasts of our inland water bodies as well as the continental shorelines of Africa and around the world.

And, so, our stop today is for reflections on the health of our aquatic ecosystems and the challenge of offshore extractive activities and the economic situation of our peoples. Similar dialogues have commenced in South Africa where fisher folks are fighting for a right to fish on the piers of the Durban harbour without restrictions that blocks them away known fishing grounds. We have also had similar conversations at Kribi, Cameroun, where the entrance of the Chad-Cameroun pipeline has destroyed coral reefs and fisher folks have to go deeper into the seas in hope of having a meaningful catch.

As we gather today on this challenged Water Front in Port Harcourt, our FishNet Dialogue will examine the past and the present and draw up a picture of our preferred future. We are looking back at what the fishing situation was in the Niger Delta before the extraction of petroleum resources despoiled the marine environment. We are reflecting on what species were available and what ecological norms our ancestors applied to ensure a steady supply of nutritious foods and how they built the local economies. We are looking at what has happened since our territories became an industrial waste dump, where mangroves have been destroyed by many factors and where fishing grounds have been largely curtailed by military shields ringing oil and gas facilities. We will touch on the rising sea levels, eroding coastlines and the salinization of our fresh water systems. Importantly, we are reflecting on who are the culprits and what must be done and how.

Our hope is that, as we sit in this and other FishNet Dialogues, we will extend hands to other fishing communities along the entire coast of Africa (and beyond), share our stories and underscore the facts of our common humanity, our right to food and our right to live in dignity. We look forward to the day when it will dawn on all that fish is more valuable than oil. We are looking forward to the day when our voices will echo Fish Not Oil on our simmering tides. We are looking forward to the day when change will truly come from below and climate action will finally have as a pivotal hook the reality that offshore fossil fuels must be left untapped and unburned.

Fisheries contribute substantially to local economies and are a vital source of protein for most of our peoples. It is estimated that fisheries contribute up to N126 billion to Nigeria’s economy annually. Sadly, only about 30 percent of our fish needs are produced locally – and these come from artisanal, aquaculture and industrial fisheries. In the Niger Delta, it is a worrisome truth that many fisher folks have become fetchers of wood as the creeks and rivers have been so polluted that fishing has become largely unproductive. Fishing communities have been forced to depend on imported fish by pollution and by reckless and illegal harvesting of fish by foreign trawlers along our continental shelf. Starkly, some analyst believe that the Nigeria is the highest importer of fish in Africa.

It is time to challenge our policy makers to interrogate the essence of development and determine what truly makes economic sense. The offshore extractive sector employs a handful of citizens, but throws millions out of work due to the taking over of fishing grounds and the pollution of the creeks, rivers and seas. Although GDP measures do not put food on dining table or is not an index of well-being, for a notion of the economic implication, we consider the case of Ghana. As at 2011, the fishery industry accounted for nearly 5 percent of Ghana’s GDP and jobs in the offshore oil industry for Ghanaians were estimated to be around 400 with an expectation that this may double by 2020. Meanwhile, fishing directly or indirectly supported up to 10 percent of the country’s population. Think about that.

We must consider the grave impacts on the global climate by the world’s continued dependence on fossil fuels – an addiction that permits extreme extraction and the poking around for deposits in the deep sea. We question the economic sense of investing huge sums of money to set up drilling platforms and Floating Production Storage and Offloading (FPSO) stations in stormy, dangerous waters.

Offshore oil production involves environmental risks, the most notable one being oil spills from oil tankers or pipelines, and from leaks and accidents including facilities failure on the platform.  The materials used in the process of drilling are also a source for worry. We cite the example of drilling muds used for the lubrication and cooling of the drill bits and pipes. The drilling muds release toxic chemicals that affect marine life. One drilling platform can drill several wells and discharge more than 90,000 metric tons of drilling fluids and metal cuttings into the ocean.

We also have to consider produced water, a fluid brought up with oil and gas and making up about 20 percent of the waste associated with offshore drilling. At exploratory stages, seismic activities send a strong shock waves across the seabed that can decrease fish catch, damage the hearing capacity of various marine species and lead to marine mammal stranding. Many dead whales washed onshore in Ghana at the time seismic and oil drilling activities peaked in that country’s offshore. We also had similar experiences during offshore accidents, such as the Chevron rig explosion off the coast of Bayelsa State in January 2012.

Offshore oil rigs also attract seabirds at night due to their lighting and flaring and because fish aggregate near them. The attraction of fish to the rigs deprive fisher folks of access due to the naval cordon around the facilities. The process of flaring involves the burning off of fossil fuels which produces black carbon (a current menace around Port Harcourt) and constitute a source of greenhouse gases that compound the global warming crisis.

Fishery on the other hand has little or no negative externality on the people or environment. It is a source of food and food security as well. It is a source of job creation. And it does not harm the climate. Offshore extraction and its externalities point towards negative indicators and are prime sources of conflicts between nations. Our FishNet Dialogues aim to build local economies, fight global warming at the base and build a movement from below to ensure a liveable planet, support local economies and build peace.