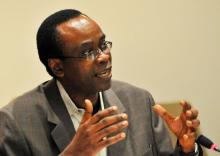 Being one of Africa’s leading advocates and campaigners for environmental and human rights, Nnimmo Bassey stood up against the practices of multinational corporations in his native Nigeria and the environmental devastation they leave behind — destroying the lands, the lives and ignoring the rights of the local population.

Last year, Bassey won the Rafto Prize in Norway, in recognition of his long-term work for environmental justice. The recent Shell case in the Netherlands has shown that oil companies can be held accountable for environmental crimes of sister holdings in foreign countries. This can be seen as an important step, according to Bassey, former Chair of Friends of the Earth International, as it means that multinationals can more easily be made answerable for the damage they do in developing countries.

What does this mean for a development path that takes environmental justice seriously and makes corporations meaningfully accountable?

Nnimmo Bassey will be attempting to provide answers in a public lecture organised by the Transnational Institute on the 6th of June, 2013.