Right Livelihood in the Laboratory of Life 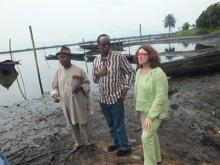 During the Roundtable on the UNEP Report held in Port Harcourt, Nigeria, on Wednesday 28 November 2013, Celestine Akpobari made a telling statement, “To destroy a people, you destroy their environment.” A reflection on that statement helps an understanding of the basis of impunity as planned and intentional infractions against the planet and the people. Akpobari’s statement opened the debates on the palpable inaction of the Nigerian government on the UNEP Report submitted to it on 4 August 2011. While the Ogoni people generally see the report as a confirmation of a death sentence long foretold, even those who see it in less apocalyptic terms agree that foot dragging over the report more than two years after it’s publication does not show any good intentions towards the people by either the Nigerian State or the direct culprit, SPDC, who has not denied being the polluter of Ogoni environment.

During the event, Monika Griefahn, a co-chair of the Right Livelihood Award Foundation emphasized that that a fundamental step to cleaning the Niger Delta environment is ensuring that new spills do not occur. A situation where new spills keep occurring as they do in the Niger Delta means that the problems keep getting compounded and efforts cannot be as effective as they ought to be. She also recalled that when she was a kid her town in Germany had a highly polluted environment, but that with converted efforts, right policies and enforcement of regulations the air air, the waters and the land were cleaned up. She is optimistic that with the right political will and with an understanding of the urgency the situation requires the Ogoni environment as well as that of the entire Niger Delta can be rescued.

The Roundtable was jointly hosted by Social Action (SA), Ogoni Solidarity Forum (OSF) and Health of Mother Earth Foundation (HOMEF). Although the UNEP report was on the Ogoni environment, this Roundtable drew participants from across the Niger Delta, showing a clear understanding that the struggle to clean up Ogoni is a struggle to clean up the entire region. The debates at the event were robust and resolutions reached included the immediate implementation of the UNEP report, scrapping of the anachronistic HYPREP and the setting up of the agency recommended by UNEP. It also decried the installation of signposts telling Ogoni people to keep off their territory without any indication as to where they should stay or go and without alternative sources of water other than the heavily polluted ones they are forced to depend on. The Roundtable asserted that what has happened in Ogoni is nothing short of ecocide and that what has been recorded there is emblematic of what the situation is across the Niger Delta.

The Roundtable was the last in series of events that commenced on Monday 25 November 2013 at the University of Port Harcourt. On that first day, the Memorandum of Understanding (MoU) establishing the Right Livelihood College campus at the University of Port Harcourt was signed by the parties involved: the Right Livelihood Awards Foundation, the University and the Health of Mother Earth Foundation. The UNIPORT campus is the fifth of of six such campuses in the world – others being in Malaysia, Germany, Sweden, Ethiopia and Chile.

The Vice-Chancellor, Prof Joseph Ajienka was represented by the Deputy Vice-Chancellor Prof Ethelbert Chinaka Nduka and expressed his delight at the honour of being the first Nigerian university to host such a laudable initiative which will immensely benefit the students and young researchers in the university and increase the quality of education, while opening them to more international learning opportunities.

The campus is domiciled in the Faculty of Social Sciences and will see researchers not only documenting and analyzing the socio-economic and environmental challenges of the region but also working at innovating and proposing solutions to those problems. They will also have the benefit of drawing from the large pool of RLAF laureates as resource persons for these efforts. Thus far the Right Livelihood Award has been given to 153 individuals/organizations from 64 countries. The Dean of the Faculty, Professor Alapiki stressed the need for scholars to make full use of the opportunities the collaboration would open.

While making opening remarks at the event, Nnimmo Bassey, director of HOMEF, likened to “living in a laboratory of contestations and experimentations birthed by failed promises, dashed hopes, brutalised lives and a thoroughly polluted environment.” He went on to add, “We are hopeful that there will be more scholarship in the areas of fusing the sciences to expose the systemic root-causes of societal challenges. In particular we are hopeful that scholars will take intense look into the mix of our challenges through political, ecological, cultural, economic and technological change.” He noted that the University of Port Harcourt’s location in the oil capital of Nigeria gives it the opportunity to “provide hands-on scholarship on the impunity and rampage that has left this territory to be infamously known as one of the top ten most polluted places on the planet.”

The maiden Right Livelihood lecture at the University of Port Harcourt was given by Dr Monika Griefahn to an audience made mostly of post graduate students desirous of taking advantage of the coming if the campus to their doorsteps. Griefahn has a background as a founding member and co-director of Greenpeace Germany from 1980 to 1983. She is active in politics and has been a member of parliament and has served as Minister for the Environment in the German Stare of Lower Saxony from 1990 to 1998.

In her lecture she highlighted the works of some past winners of the RLA – including Ken Saro-Wiwa/MOSOP in 1994. Another laureate she highlighted was Wangari Maathai of Kenya who won the award in 1984, and later won the Nobel Peace Prize 20 years later. Stressed that some of the solutions to nagging social and environmental problems championed by the laureates could easily be replicated in Nigeria. One of the examples she cited was the supply of solar power in Bangladesh and the training of women to carry out the installations in a society were men may not have access to certain compounds because of religious and cultural restrictions.

Noble Wadzah of Oilwatch Ghana was the Instigator of the second Sustainability Academy (also known as Home School) of HOMEF. He spoke on the topic: African Uprisings and the implications for the Environment. In his presentation, Mr Wadzah reviewed the flames that ignited the Arab Spring and wondered whether the rest of Africa has been shrouded in winter. He noted that the media had overlooked several uprisings. He also called to mind the colonial and neocolonial roots of the simmering discontent with leaders who are more or less agents of the old order on the continent.

He challenged academics to become more involved in the struggles for environmental justice because the struggle requires teamwork with all social forces. According to him, The Arab Spring has been only partially unpacked and usually from the political power struggles perspective only. He posited that there are other dimensions to the story, including the environmental struggle for justice that we are all confronted with. “As Africans we are all connected by confrontations with intense forces of extractive activities. We therefore need to challenge institutions, develop new thinking that takes into account our shared values of communal well being.”

The lecture plus Sustainability Academy ended on a high note with closing remarks by Dr. Eme Ekekwe, acting Head of Department of Political Sciences. His words: “What we have done here today is a wakeup call on two levels; academic and personal. The Dean has spoken about the academic part; there are scholarships and our graduate students are in a position to take advantage of those opportunities…We are to supply the intellectual needs for the practical struggle that is taking place out there. Sometimes in this country, it is not the academics and intellectuals who should be leading; it is the artisans, farmers, fishermen. It is those people whose fishing waters are being polluted, those people whose lands are been grabbed and appropriated not only by the multinationals but by our own people.”

Tuesday 26 November 2013 was devoted to visiting locations in Ogoni to see progress made in expected clean up efforts since the publication of the UNEP Report. First port of call was Goi, a community completely devastated by major oil spill and fire in 2004. Goi was once a vibrant community, now it lies silent, desolate. Schools, bakeries, fishponds, homes and other physical developments are fast fading into memory. The only building being put into occasional use in this village is the Community Hall. We were received in that hall during our visit. Soon after opening and welcoming prayers were said the community head presented us with a tuber of yam he had harvested from a nearby farm. It was a dead, stiff tuber of hydrocarbons. It gave a semblance of yam but was nothing close to that. It told a story of the pathetic life the Ogoni people have been sentenced to live. The yams, cassava and other crops look green and healthy, but that is as far as it goes. They look alive, but they are dead.

At Bodo,as at Goi, the smell of hydrocarbons fill the air. The water body here, like that of Goi is completely coated in crude, you could fill your tank by just scooping the stuff right there, Dr Griefahn said in shock. She had seen videos and documentaries of the Niger Delta, but standing in the mire and seeing that people have no option but to live in that environment must have left a mark. One telling sign of absolute optimism besides the people persisting in farming when they know the harvest would be bitter, is the sight of people starting new buildings right on the edges of the polluted waters with no chance of occupants of such buildings hoping to breath fresh air in their lifetime. Yet they build.

Before we headed to the Bodo waterfront we paid a courtesy call on HRH King Berebon, the new Paramount ruler of Bodo city and seized the visit to pay our condolences over the passing on of of father and former paramount ruler, His Royal Highness, King Felix Sunday Bebor Berebon. The king expressed the resoluteness of the Bodo people to fight for their rights and to ensure that their environment is cleaned. He informed that Bodo City is a cosmopolitan city where everyone is welcome and then suggested there might be an historical link between them and another Bodo located in Norway. We cannot say much on that right now, but there are moves to make a friendship connection between the two cities.

From Bodo we moved to Bori where excerpts from Ken Saro-Wiwa’s last writings were read from his new book Silence Would Be Treason. The book comprises some poems and 28 letters written to Sister Majella McCarron from prison between 20 October 1993 and 14 September 1995 shows Saro-Wiwa as a man who deeply loved his people and who was concerned that they hadn’t had sufficient time to strengthen different levers of leadership before the beast of State was unleashed on them. He was a man fully convicted or convinced on what he believed and who had no regrets that he was exposed to extreme risks by his resolute stand for justice.

The day was rounded off with a play, This Land is Not for Grabs written and performed by Ogoni youths. The short play showed how political leaders buy up community leaders and by so doing open up the plunder of the people’s heritage and resources. The play further showed that even though individuals pay heavy and bitter price in the struggle for justice, the will of the people ultimately triumphs. As the slogan goes, “a people united can never be defeated.”