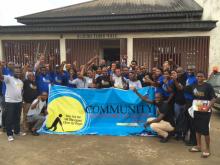 Report and Resolutions of Ecological Defenders Consultative Meeting and Training held at Aluebo Town Hall, Ogale, Nchia-Eleme on the 26th of July 2016.

On Wednesday the 26th of July 2016, the Health of Mother Earth Foundation (HOMEF) held a training and consultative meaeting for community environmental monitors, with specific emphasis on the planned clean-up of polluted sites in Ogoni. The meeting held at the Aluebo Town Hall, Ogale, Nchia-Eleme, Ogoni. Attendance was mostly from environmental monitors who had previously been identified and trained from the four Ogoni local government areas in Rivers state, as well as civil society activists, community activists and the media.

After presentations and deliberations in plenary and workgroups, the consultative meeting/training noted that the soil, air and water pollution which the people of the Ogoni area have been exposed to have adversely affected crop yield for farmers, fish yield for fisher folks and generally reduced the people’s ability to generate income and provide for their wellbeing. This fact has in turn exposed the community to unprecedented levels of poverty, destitution and deprivation.

The meeting also noted that air, soil and water pollution in Ogoniland has manifested in serious health problems which the people have had to deal with for many years. Some of these challenges ranging from various form of respiratory disorders, heart deficiencies, lung related illnesses, problems with the outer epidermis, reproductive disorders including stillbirths, foetal malformation etc., have not been appropriately studied or documented in any detailed manner.

On the implementation of the clean-up, the consultative meeting noted that the Federal Government has demonstrated significant commitment in commencing the clean-up of Ogoniland in response to the recommendations of the UNEP Report. The meeting was, however, worried that there were many cases of ongoing pollution in Ogoniland thus making the proposed clean-up rather complicated.

The consultative meeting also noted that while the government has held several meetings with various interest groups on the clean-up process, the process of consultation still requires further work. It noted that the multifarious expectations from the clean-up process is evidence that many people expect that process to become something it isn’t, and this could lead to a problem of unrealized expectations, which could seriously undermine the process. Similarly, the meeting noted that structures have not been instituted which makes the people part of the process as monitors of milestones and standards as well as actual agents of the clean-up. The meeting expressed fear that if this is not done, the type of community ‘buy-in’ and ‘ownership’ which is required for a smooth implementation process may be lost.

Based on the above, the consultative meeting reached the following resolutions and presents them as recommendations thus:

Given the fact that pollution has continued 5 years after UNEP released its report, it is recommended that the report be updated to reflect current realities. It is believed that the levels of pollution recorded between 2011 and 2016 may have changed the original findings significantly, necessitating a review of the report to establish new and more realistic baselines.

The process of consultation and sensitization should be intensified and carried on throughout the stages of the clean-up implementation process. This is to ensure that communities understand what each stage entails and what is expected in order to avoid possible confusion and misunderstanding which could result in conflict.

In all stages of the lead-up and actual implementation of the clean-up, care must be taken to ensure that the different components of the stages reflect the inclusion of all segments of the society, including consideration for women, youths and people living with disabilities.

In planning the clean-up, clear and verifiable milestones should be established and done so in such a way that all stakeholders are able to understand each stage of the milestones and when they have been met. This will ensure an active and healthy feedback cycle with all stakeholders.

In establishing milestones, the training of community members to act in different capacities in the clean-up, must be instituted as a critical means of community inclusion. The already established and trained group of Ecological Defenders drawn from the various Ogoni communities should be considered a component of this milestone.

In order to ensure that the clean-up activities enjoy the support of all current and future government establishments, an executive Bill proposing the establishing legal frameworks for the structures and funding of the clean-up process should be immediately sent to the National Assembly for consideration.

Communities should do everything possible and necessary to create the enabling environment- devoid of rancour and conflict – for the smooth implementation of the recommendation of UNEP.