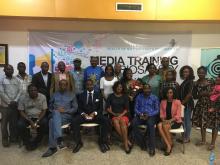 The task of ensuring that science responds to popular needs of society should be the major challenge that scientists have to overcome. While that task is met regularly, the issue of presenting science in a way that citizens can easily grasp can be daunting. Health of Mother Earth Foundation (HOMEF), the ecological think tank, hosted media practitioners in Benin City recently at a training focusing on Biosafety and agricultural modern biotechnology in particular. The journalists came from print and electronic media houses based in Lagos, Port Harcourt and Benin City.

The training offered an opportunity for the sharing of information on the issues of genetically modified organisms (GMOs) and biosafety with particular focus on sifting the myths from the facts as well as taking a critical look at the National Biosafety Management Agency Act of 2015. Journalsists were urged to help increase awareness and in so doing ensure the political forces and commercial interests behind any risky approaches to food production in Nigeria and in Africa operate with a sense of responsibility.

The subject of GMOs is a very important one as it deals with our food and directly affects our wellbeing.

After some welcome words from Nnimmo Bassey, director of HOMEF, the stage was set for Gbadebo Rhodes-Vivour to speak of the basics of GMOs. He explained what GMOs are and underscored the fact that crops are genetically modified to make them herbicide resistant or to act as pesticides. Both Bassey and Rhodes-Vivour stressed that claims that GMOs offer higher yields, more profits to farmers or are more nutritious are mostly mere propaganda.

On health impacts of GMOs, animal studies of The American Academy of Environmental Medicine (AAEM) were cited showing organ damage, gastrointestinal and immune system disorders, accelerated aging, and infertility. Human studies also show how genetically modified (GM) food can leave material behind inside us, possibly causing long-term problems. Genes inserted into GM soy, for example, can transfer into the DNA of bacteria living inside us, and toxic insecticide produced by GM corn have been found in the blood of pregnant women and their unborn fetuses. It was also noted that the percentage of Americans with three or more chronic illnesses jumped from 7% to 13% in just 9 years after the introduction of GMOs in 1990s; food allergies skyrocketed, and disorders such as autism, reproductive disorders, digestive problems, and others are on the rise.

GMOs cross pollinate and pollen grains have been known to travel several kilometers thereby contaminating non-GMO varieties. It is impossible to fully clean up our gene pool once contaminated. GMOs reduce bio-diversity, pollute water resources, and are ultimately antithetical to sustainable agriculture. Self-propagating GMO pollution will outlast the effects of global warming and nuclear waste. The potential health impact is very huge, and has inter-generational implications.

Most GM crops are engineered to be “herbicide tolerant”. Monsanto, for example, sells Roundup Ready crops, designed to survive applications of their Roundup herbicide. With the rise of “superweeds,” that are resistant to the herbicide, farmers are sometimes forced to use even more toxic herbicides every year. Not only does this create environmental harm, GM foods contain higher residues of toxic herbicides. Roundup, for example, is suspected to be linked to sterility, hormone disruption, birth defects, and cancer.

By mixing genes from totally unrelated species, genetic engineering unleashes a host of unpredictable side effects. Moreover, irrespective of the type of genes that are inserted, the very process of creating a GM plant can result in massive collateral damage that produces new toxins, allergens, carcinogens, and nutritional deficiencies.

Why are GMOs being promoted in Nigeria?

The National Biosafety Management Act came into being on 18 April 2015 after the Bill was signed into law by the former President Goodluck Jonathan. The Act established the National Biosafety Management Agency (NBMA) that has the “responsibility for providing regulatory framework, institutional and administrative mechanism for safety measures in the application of modern biotechnology in Nigeria with the view to preventing any adverse eﬀect on human health, animals, plants and environment.” (NBMA Act, 2015)

Mariann Orovwuje, who spoke on Nigerian Biosafety act, said the Act in itself is defective. Among many issues, Biosafety Act does not take into cognizance the concerns of local farmers and critical stakeholders. Some of the problematic areas of the Act include the following:

Institutions that are created to protect our environment and biosafety are actually hand-in-gloves with corporations that are trying to flood our country with exotic and risky products and merchandise. Our governments have been largely complacent about the covert activities of the biotechnology industry to undermine food sovereignty in Nigeria

According to Nnimmo Bassey (Director, Health of Mother Earth Foundation), “It was wrong of us to have established a biotechnology promotion agency (NBDA) when there was no regulatory body (NBM)] in place. The forces behind proliferation of GMOs in Nigeria are those of control and technology fostering dependency on the multinational corporations.”

One of the journalists shared this thought: “Genetic engineering of food is a seed for the re-colonisation of African countries and other developing nations. What the promoters of GMOs are trying to do is force down our throat a food programme that will not only destroy our natural habitat but could cause severe harm to our health.”

What is the way out?

There is inadequate information and awareness of the public on food sovereignty issues thus shutting out critical stakeholders, deepening public ignorance and inhibiting contributions to solutions. Sustainable food security is only way possible under the umbrella of food sovereignty – ensuring that right of the people to produce food that is healthy, culturally appropriate and produced using ecological sound methods.

According to Gbadebo Rhodes-Vivour, “The movement to protect our food system is one that requires collective efforts. We must all take up responsibility to ensure we keep our environment free of contamination and protect our biodiversity. There is need for us to strengthen subsistence agriculture by providing adequate storage facilities, good access roads to markets, providing subsidies on farming implements, better access to farmlands and education of the public on the advantages of local food production.”

Akinbode Oluwafemi who spoke on the role of the media in promoting biosafety noted that the media plays an important role in publicizing basic information and findings from domestic and foreign research in order to raise public awareness and promote public participation in biosafety issues. The public requires such information to understand GMOs, assert their right to a safe and healthy food and to be able to make informed choices with regard to food.

The sessions were highly interactive and information documentaries were screened to buttress the points shared. Participants acknowledged that they were empowered by the training and will endeavor to promote public awareness on the issues of biosafety.

One left the session reinforced in the conviction that GM crops and foods should not be allowed into Nigeria because they would not only create health challenges, destroy our natural ecosystem but also lead to the neo-colonization of Nigeria and Africa.