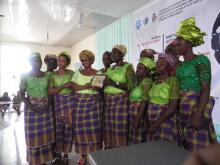 The Sustainability Academy marking the International Women’s day for Peace and Disarmament was held on 24th May 2017 by the Centre for Conflict and Gender Studies, University of Port Harcourt, in collaboration with Health of Mother Earth Foundation (HOMEF).

Women play critical roles in peace and conflict resolution at local, national and international levels. At the same time, women have been the unfortunate victims of crises arising from political and environmental wars. The marking of International Day was back grounded by a review of resource conflicts that women and communities contend with. Critical attention was also paid to ways by which the concept of Re-Source Democracy could be used in conflict resolution and especially in urging elimination of the abuse of nature’s gifts to humankind. The day was also used to recognise some women who have been outstanding amazons in conflict resolution.

The event had in attendance the Vice Chancellor of the University of Port Harcourt, Deans of Faculties, researchers, staff and students of the centre, representatives from Non-governmental organizations and the Rumuekpe Women Prayer group.

According to the Director of HOMEF, “there is no peace when women are deprived of their right to own and develop lands; when the environment is polluted and livelihoods are destroyed without responsibility and when citizens do not have a say as to what extractive activities are conducted in their communities even though there is no war. Re-source democracy helps us to reconnect to nature in a way will bring about elimination of conflicts, community involvement in re-source governance and ensure a sustainable use of re- sources in a manner that is fully in consonance with socio-cultural, religious and ethical dictates.”

Ambassador Nkoyo Toyo, alawyer and development consultant spoke on Resource Control, Gender and Peace in the Niger Delta. She underscored the need for a new and urgent approach to resource governance in the region. According to her, “Our ecosystems have become weak and our environment is in a near crisis state. Though there have been several reviews and reforms not much has changed. The region still lacks access to basic amenities despite her possession of enormous resources. Inequitable distribution of wealth has resulted in conflicts and growing incidences of militancy, cultism, crime, violence, hate and unhealthy rivalries.”

According to Nkoyo, “an alternative and more sustainable approach is a nature focussed approach which estimates the proper place of resource exploitation and interprets resources through the prism of communities, species and peoples living in the region who have traditionally seen themselves as supervisors of what they own. Re-source democracy is about stewardship and less about control or regulator rights.”

She called for action not only against central governments but within the region, states, communities and among groups of people.

Women were encouraged to participate in decisions that determine access to and enjoyment of nature’s resources as well as seeking ways to remove those obstacles erected by the politics of access and power as they are often caught in the cross fire of resource conflicts and are the major victims in impacted communities.

Another speaker at the event, Joy Akate Lale, looked at the relevance of giving equal opportunities to both the male and female children to access quality education. “Education is a critical element for freeing our society from gender blind resource management and use. Most of the development sectors are still dominated by men but resource ownership from the gender perspective advocates for a situation whereby men and women have equal access to resources, whether tangible or intangible” she stated.

In his submission, peace activist, Alyn Ware stated that nuclear weapons play an important role in conflicts around the world and because the conflicts affect both men and women it is important that women are engaged in peace and disarmament initiatives.  The fabrication and use of nuclear weapons pose severe threats to humanity. Cancers, malformation in children, environmental degradation, terrorism, war and poverty are some of the risks associated with nuclear arms.

To highlight the roles played by women in peace building in the Niger Delta, HOMEF singled out two women and a group of women to be honoured for their roles. Those honoured were Ambassador Nkoyo Toyo (general peace efforts), Mrs Joy Akate Lale (for girlchild education) and the Women Prayer Warrior Group (peace building in Rumuekpe community).

Women of Rumuekpe Prayer WariorGroupfrom Emuoha LGA in Rivers State were recognised for the roles they played in conflict resolution in their community between 2006 and 2010.

In the midst of serious violence that wracked Rumuekpe communities, the women mobilized themselves to intervene and ensure peace returned. They held a weekly prayer meeting in the community despite threats from cultists’ activities and went beyond prayers to mediating between warring groups. In November 2010, they marched half naked to the Rivers State House of Assembly and to the Government House protesting against the activities of some key personalities in the local government in fuelling the crisis in their community.

Women form an integral part of the population and their input cannot be neglected in matters of resource governance, of peace and crisis management. They must continue to reject the culture of silence and confront actions that seek to delegitimise both their voice and contributions.The call for re-source democracy was seen as a vital bridge to connect the people to nature in ways that can sustain both the present and future generations.