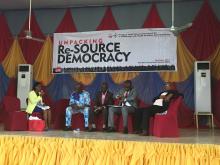 Progress has been measured by how much humans are able to transform Nature and increasingly this has been seen to be directly related to how exploitative of Nature and how polluting a nation or corporate entity can be. Clearly, the environmental crises confronting the world is inseparable from the economic crisis.

The quest for materials and their transformation over the years have led to slavery, colonialism, autocracy and diverse socio-cultural corruption and manipulations. It has led to forceful dispossession of persons, communities and nations of their heritage through wars and other violent confrontations. This exploitative pathway, in which we have chiselled and drilled into the belly of the Earth, polluted our rivers and atmosphere, mowed down mountains, chopped down forests and poisoned our food systems, has taken humans further away from Nature over time.

Humankind’s quest for the control of Nature has led to the waging of unwinnable wars over natural forces and manifestations. Rising consumption and wastages have led to massive extinction of species and severe environmental changes – some of which may well be irreversible. Progress is largely measured by uniformity of products that yield to mass production, transportation and consumption. We seem to have forgotten that Nature thrives in diversities. This psychological and physical drifting from Nature is proving unsustainable as planetary boundaries and limits are being reached and exceeded.

The current global economic crisis will not go away as long as the current basis of relations stay. A capitalist economic system respects neither nature nor environment or peoples. It is based intrinsically on exploitative, competitive and non-regenerative relationships and cannot be sustained in perpetuity. When you don’t regenerate, you are not restorative and your actions are firmly planted on the path of degeneration. Even the accumulation of wealth by the 1 percent has reached its peak and the only way forward has to be down.

The current system denies reality. That is why the president of arguably the most powerful nation on Earth can wake up and exit from a global effort to fight a common challenge: climate change. That is when power trumps good sense. This myopic power denies science and even defies reasonable self-interest.   Although the Paris Agreement is largely inadequate, the pulling away of the USA, the second largest greenhouse emitter, from the global climate space, as outrageous as it is, only confirms that power only respects primitive self-interest.

Sustainability is not just a measure of a thing being available or useable in perpetuity. It also connotes its staying recognisable in form and speaks of intergenerational justice and responsibilities.

Re-Source democracy calls for a re-turn to the source, a re-connection to Nature. It calls for a recovery of memory. It calls for a dream of our preferred future or even multiple futures. It calls for the recognition of the fact that humans are just one of the species on Planet Earth and that we are a part of a system whose survival depends on interrelationships and solidarity.

To ensure Re-Source democracy, we have to be immersed in the defence of life and staying in the battle line against inequality as well as political and social injustices. We have to build a future that promotes cooperative and collaborative behaviours. That is what creates shared abundance, the good life or eti uwem. Scarcity is promoted by competition and that breeds all sorts of social and environmental misbehaviours.

Nature is self-regenerating, but human and corporate activities have brought in disruptions of those circles and cycles of life. Examples include the utter degradation of our environment by oil spills, gas flares, toxic wastes, industrial effluents and the like. It includes the exploitation of re-sources without prior informed consent of citizens in the territories. We have to pause to ask what the Niger Delta will look like by the close of the century. What would be the situation of the far North if desertification is not checked? What would be the case of our territories if gully erosion and deforestation continue unabated?

Environmental degradation disrupts our linkages to Nature, shrivels our humanity and throws us into unhealthy rivalry and struggles for whatever goods remain. It alters our thought patterns and social relations. It makes the unacceptable appear attractive and even acceptable. How would anyone drink water that is visibly polluted or eat foods that are clearly known to be toxic? How would we accept these without major uprisings?

What would make Nigeria stay in the present unsuitable unitary national architecture fabricated by military adventurers to suit their command structure? How could we dream of building a democratic and federal nation on the basis of autocratic and dictatorial military scaffolds? More questions can be asked, but let us restrict ourselves to the way we have treated Nature’s gifts to our nation. The arrival of crude oil and petroleum resources literally poisoned and damaged our environment, economy, politics and socio-cultural relationships. Agriculture got ignored, manufacturing got side-lined and all eyes got riveted on US dollars flowing into the national pot. We became captives of voodoo economics. Do nothing, grab everything.

Re-Source Democracy requires that we train our eyes to see what Nature has presented to every community and to what extent the communities are involved in decisions that affect the exploitation, protection or use of the re-sources in their territories. It requires that no one gets killed or colonised simply because of such endowments. It requires that we question how what we have is utilised and on what basis. It is about our right to life, freedom from contamination and respect of the Rights of Mother Earth.

We have hopes that unpacking the concept of Re-Source Democracy will provide us with ideas on how to redirect the nation from divisive and exploitation pathways and provide the platforms for truly democratic relationships with each other and with Nature – one that is built on local knowledge and wisdom. It should help us cultivate mutual respects between the many groupings in our nation. It should above all help encourage us to handle the gifts of Nature with due deference.

The Faculty of Social Sciences, University of Uyo provides an excellent academic environment for the interrogation of this existential challenges. And we are happy that you have welcomed us to be part of this conversation and probably many others to follow.

Remarks made by Nnimmo Bassey, Director of Health of Mother Earth Foundation (HOMEF), at the Sustainability Academy on the theme Unpacking Re-Source Democracy held at Bath Ebong Hall, University of Uyo on 2nd June 2017