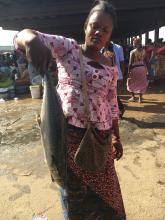 At the event, Ahianyo Kokou Guy, the chairman of the Board of JCAD stated that the gathering was called to mobilize fishers who have been impacted by oil exploration/extraction as well as from impacts of climate change. It was also to develop resilience strategies to climate change to help protect their livelihoods. He was optimistic that the sharing of oil impact experiences from Ghana and Nigeria would set the stage for the inauguration of the FishNet Alliance in Togo.

Steady Growth of the Fishing Sector in Togo

First presentation was on Fisheries and the Impacts of Climate Change by the leader of the fishers group, Mr Dermane Adam. He stated that fishing in Togo is mostly artisanal and that there are a total of 22,000 fishers – 12,000 of which are women while 10,000 are men. Their current fishing harbour at Ablogame, Lome, is giving way to an expanding container port while a new one is being constructed by the government with support from the Japanese government.

The sector was mostly dominated by fishermen and women from Ghana and other countries until the 1980s when then president Eyadema decided to promote the sector in order to have more Togolese in the trade. Fishers in Togo became better organised from the 1990s, this made the government pay more attention to the sector.

“I come from Northern Togo, and many wonder how I became a fisherman here. I became a professional fisherman in the 1980s when then president showed interest in developing the sector and getting more Togolese involved, ” said Adam.

Today they have fishing schools and the sector is gradually getting more mechanised with the introduction of newer fishing techniques.

Fishers have to go further offshore to increase the chance of making a good catch. This would require the acquisition of bigger boats which are purchased in Ghana at the cost of $1400 each.

“After buying the boat you have to buy the outboard engines imported from Japan and sometimes from China. One engine costs over $4000”, Adam added. “Besides the purchase of the boat and an engine, one still need to buy the nets at about same price as the engine. It is an expensive business and the possibility of getting financial support from the banks is very slim”, he said.

Adam is worried that petroleum exploration and extraction activities in Togolese waters will harm the marine ecosystems and compound the challenges facing the fishers. He noted that fish are migrating away from noisy coastlines and from pollution from oil spills and waste oils.

Adam was hopeful that with the formation of the FishNet Alliance, the fishers would have information about activities in other countries and also have a wider space for sharing experiences.

Oil and Gas eroding the identity of the Fisheries Sector

Noble Wadzah of Oilwatch Ghana spoke on the subject ‘The Fisheries Sector: A Lost identity in the Scheme of Oil and Gas’. His presentation covered the key features of Revenue Management Act of Ghana, highlighting the big failures and gaps in its formulation and with regards to the fisheries sector. He also focused on how fisheries sector is perceived in official circles in Ghana.

Oil business picked up with the discovery of the resource in Ghana in 2008. Politicians and bureaucrats were very happy. The citizens got drawn into the euphoria – all believing that a lot of funds would come into the system and citizens would enter an era of prosperity.

Ghana started with thinking about how to manage oil revenue before thinking of any Oil and Gas Policy and then harmonizing the Exploration and Production Law. Wadzah saw this as a fatal flaw in the approach to the oil and gas business. He then detailed the tripod on which the Act stands as follows:

Stabilize economy when there are shocks

His brisk presentation went on to list the following:

Wadzah rounded up his presentation by highlighting that 10 years of oil extraction, no benefits have trickled down to the local fishers and it has become clear that rather than expecting gains they are in for more loses.

He recommended that as a way forward, oil and gas business must not dominate or destroy fisheries business. He noted that fisheries are renewable whereas oil is not and that whereas fisheries support citizen’s economy, oil does not. He also stated that the FishNet Alliance demands that investments must shift away fossil energy and into renewables. The Alliance also believes that fisheries holds the key to economic progress and nutrition for Africa.

Nnimmo Bassey brought a report from Nigeria and this elicited interest from participants who wanted to know what the clean-up situation was in the Niger Delta after six decades of oil and gas extraction. What is the fate of the 6.5 million fishers in Nigeria?  Participants learned that the clean-up process of the Niger Delta is commencing with Ogoni territory and that according to a report prepared by the United Nations Environment Programme (UNEP), it would take a generation (30 years) to complete the clean-up and restoration of that environment.

The general situation of oil and gas exploration in inland water bodies as well as along the entire continental coastline was examined with the potential for political conflicts between nations – due to the resources being found along national boundaries- as well as the impending oil spills and other polluting activities. Pollution of ground water was highlighted as problematic in South Sudan and Nigeria.

The damage to fisheries was emphasized and the fact that fishers have already started campaigns against extractive activities in Nigeria, Ghana, Cameroon and South Africa was underscored. Of interest was the fact that some countries have already legislated against extraction of petroleum resources in their waters. Examples were given of Costa Rica and Belize. It also mentioned that El Salvador has banned mining in order to protect nature’s gifts in that nation.

At the end of deliberations, the FishNet Alliance Togo was formally inaugurated by Nnimmo Bassey. He stressed that the Alliance was a platform for solidarity, connecting of struggles and support for livelihoods.

Mr Adam declared that “united we are strong”. He also added that the Alliance will embolden the fishers in Togo to take strong positions, make strong demands for the protection of marine ecosystems. He added, “we are ready to share information and to participate in activities of the network”.