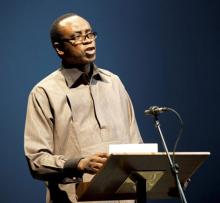 After two sessions of serious interrogations of Climate Change and the Looming Food Crisis in Abuja and Benin City, this session in Lagos looks at how we communicate these crises. This session rounds off the inaugural Health of Mother Earth Foundation’s Sustainability Academy also known as HOME School.

Although global warming has become a major cause for concern in Nigeria as well as all over the world, large numbers of our peoples are still quite ignorant of what it is all about. No doubt people recognise that weather events such as rainfall and flooding are getting more intense. They can even tell you the rhythms of the weather have become unpredictable. Our people have also noticed an increase in climate-sensitive diseases and other immediate impacts of climate change. However, when it comes to saying what is responsible for climate change the answers taper out. If we do not know the cause and those responsible it is doubtful that we can solve the problem.

There are also some that have knowledge of the causes as well as the culprits of the looming catastrophic consequences and yet stay silent. Indeed when they are ready to speak they focus on drainage clearance, tree planting and clearance of refuse. While these are important, they are elementary environmental problems and it is a shame that we should still be grappling with them at this age.

Effective communication of climate change and the looming food crisis will help us unpack the problem, outline true and false solutions to the crises and assist in preparing a strategy for action. In this session our eco-instigator, Pablo Solon, will examine both local and global contexts of the problems. In the follow-up conversation at this session we hope ways of effectively communicating the climate crisis will be outlined. We hope that concepts like Reducing Emissions From Deforestation and Forest Degradation in developing countries (REDD), Clean Development Mechanisms (CDM) and other market-based false solutions would be exposed for what they are. Projects like Eko Atlantic must be interrogated as a climate challenge, not a solution, recognising the fact of sea level rise and the low-lying nature of Nigeria’s vulnerable coastline.

Communicating climate change is enhanced when the rather complex problem is explained from a creative and multidisciplinary base. It requires the uncovering of climate rhetoric that confuse the issues and expose vulnerable nations and peoples to the heavy impacts of global warming. In doing this, it is vital to clearly outline our audience and target groups must include communities, youths, and social movements including faith-based groups. It is essential to focus also on policy makers and the business community. The communication of global warming must include the historical roots of the crisis and the historical responsibilities of polluters who have foisted the problem on the world. The links with impending food loses must be understood and the sneaky moves by purveyors of genetically engineered crops as climate-smart must be uncovered and denounced.

It is important to communicate that the Stone Age did not end for lack of stones and that the fossil fuels age will not have to wait until the last fossil fuel has been burnt before we transit from it. The current dependence on fossil fuels has been seen to be the major cause of global warming. The World Bank, the International Energy Agency and others have said that at least 80% of known fossil fuels reserves must be left untapped/unburnt if we are to have an 80% chance of avoiding a temperature increase of up to 2oC. The fact that oil companies and oil dependent governments would not pay heed to this warning indicates that leaders are so stuck in the present that they cannot see how they are jeopardizing the future of our children and generations to come.

The same must be said about gas flaring in Nigeria and elsewhere. This obnoxious act is harmful to the planet and to human health besides being an obscene economic waste. Every nation must play a part in the flight against Global warming. Even where we speak of climate justice and climate debt, we cannot justify inaction or actions that compound the crisis on the basis that we want to catch up with the polluters. There is nothing like catch-up justice!

Temperature increases of the magnitude that are now a possibility because of refusal of polluting nations to commit to measurable and verifiable emissions cut must be clearly communicated. Africa is poised to heat up much more than other regions. Continuous temperature rise because of lack of commitment of nations to cut emissions at source will translate to the roasting of Africa, an already very vulnerable continent. Food production capacity will also be diminished, exposing the continent to great dangers.

HOMEF is an ecological think tank that aims to connect the sectorial dots in our struggle for a safe, sane and secure environment in which humans live in solidarity and in dignity. Article 5 of the African Charter on Human and People’s Rights (1981) assures us that Every individual shall have the right to the respect of the dignity inherent in a human being. To achieve these HOMEF provides an inclusive space for environmental, youth, women, social, labour, faith-based and other justice communities to join hands in holistic struggles to secure the rights of our peoples and of our environment.

We have chosen to focus on climate change and the looming food crisis in this maiden session because Africa is in the line of fire of climate impacts. Through this and other sessions of our Sustainability Academy we will strive to uncover the roots of political and ecological problems confronting us and proffer solutions that will help heal our planet. Our Sustainability Academy is designed as a multi-city academy with the objective of ensuring sufficient spread of the ideas but in terms of diverse locations but also with regard to the social groupings participating.

We have in our midst today Pablo Solon who served as ambassador of the Plurinational State of Bolivia to the United Nations 2009-2011 and was his country’s lead negotiator at the United Nation’s Framework Convention on Climate Change (UNFCCC) Conference of Parties (COPs 15 and 16) at Copenhagen and Cancun. His principled stand on climate justice and the rights of nature to maintain its cycles were exemplary and remain so today.

After the failure of the Copenhagen COP, Solon played a key role in his nation’s convening of the World Peoples Conference on Climate Change and the Rights of Mother Earth at Cochabamba, in April 2010. For once we saw a clear convergence between politics and environmental defense at the highest national level – with President Evo Morales in the driving seat. The major outcomes of the Peoples’ Summit were the People’s Agreement on Climate Change as well as the draft Universal Declaration on the Rights of Mother Earth. Solon is a key figure in the struggle for climate justice and it is our pleasure to have him enrolled as the first Fellow of HOMEF’s Sustainability Academy.

On behalf of the HOMEF Team, I welcome you all to this session and I now give the floor to Pablo Solon.