Bulldozers, A Superhighway and the Ekuri Community Forest 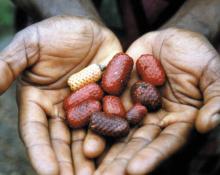 Bulldozers and forests are not friends. Neither are highways or super highways, as the people of Ekuri Community are learning. The Ekuri Community Forest in Cross River State, Nigeria, is an acclaimed example of how communities can sustainably manage their forest. Now, this forest is under threat from the State Government that has embarked on the construction of a 260 Km, 6 lanes dual carriage super highway through their forest, using the highly controversial Land Use Act of 1979 as a cover for dispossessing the people of their land, forest and patrimony.

When the ground breaking ceremony for this project was conducted by President Muhammadu Buhari on 30th October 2015, the Ekuri Community thought that having an all-weather road pass by their community would bring to an end their perpetual struggle to secure access to the outside world through the earth road they had built by community effort. This thinking was shattered by a Public Notice of Revocation signed by the Commissioner for Lands and Urban Development and published in a local newspaper on 22nd January 2016 decreeing, among other things, that:

“all rights of occupancy existing or deemed to exist on all that piece of land or parcel of land lying and situate along the Super Highway from Esighi, Bakassi Local Government Government Area to Bekwarra Local Government Area of Cross River State covering a distance of 260km approximately and having an offset of 200m on either side of the centre line of the road and further 10km after the span of the Super Highway, excluding Government Reserves and public institutions are hereby revoked for overriding public purpose absolutely”.

The community studied the “Notice of Revocation” and the line profile and found that some of the coordinates show that their forest, community lands and settlements would be taken up by the Super Highway and the extraordinary right of way of 10 Km claimed by the government – beyond the 200 metres right of way allowed from the centre line on each side of the road. Little wonder the community characterises this usurpation as a case of crass land land grabbing. This sort of grabbing tends to suggest that this part of Nigeria is Tarzan country or simply a no-man’s land.

Before this, some critics of the Super Highway project such as the Rainforest Resource Development Centre (RRDC) had stated that “the BLUE PRINTS of such a huge 260km 6 lanes Super Highway project running across the entire Cross River State of Nigeria was not made public before the commencement of construction at the ground breaking event.  Significantly also, the blue print of the said project has not been made public till this moment.  This is a contravention of the Freedom of Information Act, 2011 of the National Assembly as well as other related legislations…”

Other significant issues raised include the fact that no credible Environmental Impact Assessment (EIA) have been conducted before the taking off of the project. The project threatens the Cross River National Park as the highway traverses the buffer zone of the forest.

In its press briefing of 6th November 2015, the RRDC expressed the fear that contrary to the requirement of the Land Use Act, no schedules of compensation (including the names of beneficiaries) had been made public.  “The risk is that this project could end up escalating rural poverty if the issues of compensations are neglected.  This is so because the affected indigenous people and communities of Cross River State of Nigeria who own these resources could end up losing their sources of livelihoods, income and wellbeing, as well as their natural heritage and territories.”

What RDDC feared is unfolding before the eyes of the Ekuri people and the world must not keep a blind eye to this.

The Ekuri Community through a petition, dated 6th February 2016, reminded the Cross River State government that they had “for centuries conserved and managed our Ekuri community forest for its rich biodiversity and ecosystems services not only for our sustainable development but for the entire world. Since 1992, we pioneered formal community forestry in Nigeria and established the Ekuri Initiative (an NGO registered with the Federal Government) with a mandate in forest conservation, sustainable forest management, community development and poverty reduction. Since its inception, we have recorded inspiring successes. We have developed and implemented a land use plan which we jealously adhere to, a flagship community forestry project in Nigeria (a credit to Cross River State), the largest and best community managed forest in West Africa totaling 33,600ha. We received the UNEP Equator Award in 2004 for our outstanding passion, commitments and efforts to reducing poverty through the conservation and sustainable use of our biodiversity. We have been visited by several communities from Nigeria, Cameroon, Kenya, Uganda and Mozambique and a host of researchers to learn from our experiences. Our activities have been replicated by international development agencies and local NGOs and has brought fame to Cross River State and Nigeria as a whole. The planned destruction of our community forests which we have labored so hard to protect and conserve is not a welcome development. The resolve of our forebears to conserve our forest must be continued in perpetuity being a bequest and legacy to all the Ekuri people living and yet unborn.”

With the level of dispossession staring them in the face, the Ekuri Community decided to reject the passage of the Super Highway through their forest and demand a realignment of the road. According to community sources, their petition received a quick but shocking response:

“At the receipt of the Protest Letter, the Governor has quickly sent a bulldozer this morning to Ekuri to begin the destruction of the Ekuri community forest in the name of the Super Highway. This is to show power and strength against poor communities and in defiance of the dictates of the rule of law.”

If the world keeps quiet and allows the bulldozers to have their way, they would not only bulldoze the future of the Ekuri people, the act would entrench impunity, satisfy the lust for capital, promote deforestation in one of the last remaining pristine forest in Africa and blunt our collective hope for tackling global warming. This is a challenge, not just for Ekuri Community but for the entire global community.